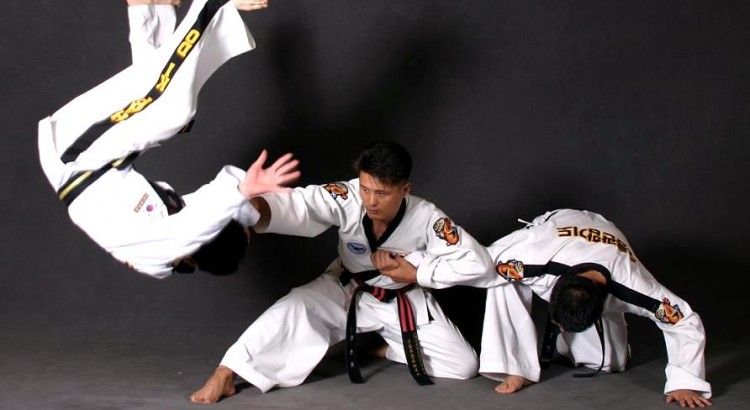 Hapkido is a Korean while aikido is a Japanese martial art form, although the names of both of these disciplines are denoted by the same Chinese characters which literally means “the way of harmonious spirit” or “the way of unifying life energy.” This is so because both actually originated from the same source – the teachings of Sokaku Takeda on  “daito-ryū aiki-jujutsu,” a more ancient form of Japanese fighting techniques that make use of an opponent’s aggression and momentum of attack to his disadvantage. Takeda’s students included Morihei Ueshiba, the founder of aikido, and Choi Yong-sool, the founder of hapkido.

Ueshiba enriched the fighting discipline taught by Takeda by incorporating certain philosophical and spiritual elements into it based on his own mystical studies. He also added some elements of judo. He turned the “jutsu,” literally meaning skill or technique, into “do,” which is more akin to the Chinese concept of the “Tao.” Ueshiba’s aikido transformed a set of fighting techniques into a complete and integrated new way of looking at the world. Aikido as a distinct martial art form was developed during the 1940s, earlier than Hapkido by about a decade.

Choi returned to his native Korea following World War II. Back in his native land, he started teaching the fighting techniques he learned in Japan from Takeda. Eventually, he also incorporated other fighting techniques from other Japanese martial arts like judo and karate as well as from Korea’s own taekwondo and tang soo do. He called his discipline hapkido, with “hapki” being the literal Korean translation of the Japanese “aiki.” However, unlike Ueshiba, Choi was less concerned with philosophical and spiritual development than he was with finding and perfecting more efficient ways of striking, grappling and otherwise subduing opponents. Unlike Ueshiba who was aiming for a more unifying way of looking at things, Choi simply wants to give his students a collection of martial arts techiques they can use in real-life situations. After all, most of his early students in post-war Korea then were soldiers, police officers, bodyguards of politicians, and other people who fight for their living.

Like Israel’s Krav Maga, Korea’s hapkido evolved to become a truly eclectic martial arts discipline, adding new fighting techniques as often as needed. In fact, some would even say that hapkido was actually the world’s first, original mixed martial arts system. As presently practiced, hapkido does seek to be a fully comprehensive, contemporary fighting style. As such, it tries to avoid narrow specialization in any particular type of technique or range of fighting. It maintains a wide range of tactics for striking, standing joint locks, throwing, and pinning down opponents. It also incorporates tactics for ground fighting to evade or escape wrestling or submission grappling engagements done by opponents.

In aikido, students also get to learn fighting technics and tactics. However, proportionately greater time is spent on taking down lectures about concepts, philosophy, ethiquette and life principles. Typical subjects taught and discussed in an aikido class include Extending Your Mind, Knowing Your Partner’s Mind, Respecting Your Partner’s Ki, Putting Yourself In Your Partner’s Place, and Performing With Confidence. At least five minutes before and five minutes after each lesson, students are also typically made to do some hara breathing exercises in order to better ingrain in them the experience ki.

Despite the differences in empasis, both hapkido and aikido at their core train students to receive attacks with less resistance, moving the force of the attack away from the defender, redirecting it and using it against the attacker. This is a very different approach to most other traditional styles of fighting wherein attacks are usually opposed head-on with a counter-attack. In this manner, the hapkido or aikido defender also makes use of far less energy and force as compared with other martial arts styles. Often, as a result of a hapkido or aikido counter-move, an opponent will be.  put in a state of imbalance that will make him vulnerable to joint locks, take downs or body throws.