Traditional Jiu Jitsu, commonly referred to today as Judo or Judoka, is in fact the second most popular sport in the world and falls only behind Soccer/Football in terms of popularity and number of practitioners. Just about everywhere you go you will find someone bringing along their own Jiu Jitsu Gi.

The gi is not your typical sports uniform. It isn’t really there to signify what sport or martial art a person is practicing and is in reality designed for practicality during combat. People practicing the different forms of Jiu Jitsu understand that the uniform forms a part of their repertoire and that it isn’t just there for show.

A Brief Glimpse at the History of the Gi

The Jiu Jitsu Gi is in fact the very first Eastern martial art to introduce the uniform to the public. Before the gi was used in martial arts schools, instructors and teachers alike had to use their regular, traditional kimono. Unfortunately, the kimono was a bit too long and baggy for practical use in combat.

The concept of Jiu Jitsu, after all, was more on grappling and submission although it did have some areas regarding striking and defenses for striking. Since it focused more on grabbing hold of an opponent, the kimono needed to be shorted a little bit and made slightly tighter.

These slight changes would create a uniform that was free flowing to allow ease of movement but the fabric would still allow competitors to easily grab each other during competitive combat.

Jigoro Kano, the founder of modern Judo, was the first to design and use this type of uniform in his martial arts schools. It instantly became an advantage and was later adopted into other martial arts such as Karate.

When Mitsuyo Maeda informally started what became Brazilian Jiu Jitsu, he also revised the gi ever so slightly to make it more compatible with the new style they were developing. It was a bit baggier and heavier than the traditional gi worn in Japan.

Today, just about every martial art uses the gi initially started by traditional Jiu Jitsu/Judo trainers in Japan. Tae Kwon Do, Pencak Silat, Brazilian Jiu Jitsu, and more all practice the use of the gi. 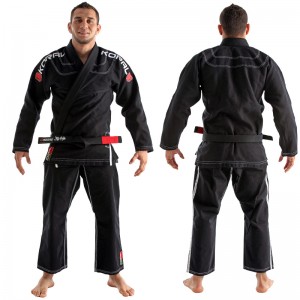 The gi is split into three major components:

The typical jacket in Jiu Jitsu is loose and not as heavily padded as some come to believe. Brazilian Jiu Jitsu is the martial art that really popularized the idea of heavier jackets because of their focus on sports grappling.

Drawstring pants are often a bit loose and are also a bit short, coming down only to the ankles. These designs allow a person to move swiftly and freely without the worry of stumbling on their own uniform. The pants are often padded at the knees for safety purposes.

Belts were introduced to allow a person to immediately identify their level of skill in the art of Jiu Jitsu and it has been adapted in just about every martial art there is in the world today. However, it is quite often for a very talented white belt to defeat a person of a higher ranking.

This is because the gi removes the advantage of strength and speed, allowing competitors to focus entirely on skill and technique. A stronger man can still be grabbed and toppled because of the loose fabric of the gi – all it would take is a skilled opponent to use the right technique at the right time.

Issues Regarding the Gi

Many competitions regulate the use of certain gi varieties. For one instance, double-weaved jackets used to have a very wide seam in the back but this made it too difficult for an opponent to grab that particular area. Hence these wide back seams were banned in 2005, particularly for international competitions.

Double-weave jackets are also more costly since they do use far more material. They are also more durable in terms of use. However, many schools are now pushing forth the concept of using single-weave jackets for competitions because of they again make the fights focus on technique instead of strength.

If you’re starting out with your training then buying a comfortable gi is going to be a big part of the process. The first thing you should know is that you shouldn’t buy a gi without first consulting your instructor. Your instructor will give you good insight on the size and style of gi that works best for you.

You can learn more about Judo Gi and Brazilian Jiu Jitsu Gi which are both evolutions of the traditional Jiu Jitsu (Jujutsu).

One thought on “Jiu Jitsu Gi”