Kung Fu is one of the oldest forms of martial arts and it has so many styles that it can be difficult to keep up with. Kung Fu is also known as Gung Fu or Wushu. While there are many styles such as Wing Chun and Tai Chi, one thing that keeps them in common is the traditional Kung Fu gi.

Many martial arts also use a gi. Judo, Karate, Aikido, Hapkido, and even Krav Maga have all adapted the use of the conventional gi. Kung Fu however uses a different type of uniform. The Kung Fu gi is very easy to identify because of its unique look and how it visually pops out.

The Design of the Kung Fu Gi 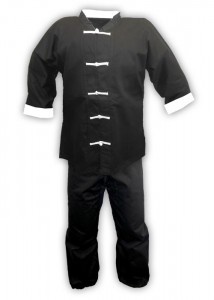 The Kung Fu gi is very different from the uniform of other martial arts. For one thing, the sleeves can either be completely gone (sleeveless jacket) or they can be excessively long. The pants are also different because they tighten around the ankles.

The front of the jacket is perhaps the most different in comparison to other martial arts. This is because the Kung Fu gi uses frog buttons that neatly line and close the front flaps of the jacket. They create a visually appealing design that makes it easy to identify even from a distance.

Another difference is that the belts are not the same thick belts used in Karate or Judo. In the Kung Fu gi the belts are normally wide sashes made from silk or satin. They are quite glossy and visually loud.

One interesting fact is that the traditional Kung Fu gi is also the traditional wear of old men in China. This is because it is quite comfortable in both hot and cold environments.

The closed ankles and longer sleeves also allow the practitioner to move without restriction and with unprecedented speed. Kung Fu is known for its focus on fluid movement instead of throws and submissions hence its uniform is designed to embody this concept.

The Issue of the Belt

Kung Fu never really used a belt system. It only adapted the use of colored belts to tell rank and skill after it was popularized in the 1900s when Judo and Aikido became famous in the West. Even then, the only real colors were white and black until Western schools adapted yellow, blue, and many others.

While many Kung Fu schools have adapted this system, many traditional Kung Fu specialists consider this as an insult to the history of the art. This is because the martial arts that introduced the use of the belt were all Japanese, so why would a Chinese martial art do the same?

This has mostly been resolved during the 1980s however, when celebrities such as Jackie Chan and Sammo Hung starred in movies where the colored sash became a notable feature.

Nowadays, just about every Kung Fu school uses the colored belts to show rank and skill. Only the most traditional schools, often found in mainland China, continue the old tradition of using signed scrolls.

The thickness of the jacket and the ring to fasten it at the back are also important elements to consider. Kung Fu focuses more on striking and countering as well as quick feet work therefore a light jacket is often better than a thick, heavy one. Only arts like Aikido and Judo require very thick jackets for their gi.

There is no central headquarters or international organization that unites all bodies of Kung Fu. This is why there is no universal Kung Fu gi for competitive events like international tournaments. For this reason it is expected that the uniform and style in one school will be radically different in another.

If one school uses five colors of belts then another may use nine or none at all.

This lack of a central governing body for the art of Kung Fu has given rise to all sorts of varieties. For the most part, however, if a student decides to jump from one Kung Fu style to the next (like Jackie Chan who has mastered several Kung Fu varieties) then the traditional Kung Fu gi might suffice.

Most instructors are more concerned with performance, after all, and not the aesthetics.

You can learn about Kung Fu belts here.