Brazilian Jiu Jitsu saw a recent resurgence in popularity ever since UFC fighters began bringing the art to the public eye. Just a few decades ago very few ever heard of the art but now there are students lining up to buy their first set of Brazilian Jiu Jitsu gi, belt, and practice equipment.

It’s a little sad though because not all of these enthusiastic students understand the meaning and history of the gi that they are wearing. The Brazilian Jiu Jitsu gi carries a lineage and history that is almost as rich as the martial art itself.

From Kimono to Gi

The gi goes all the way back to 1907 and to a different martial art. Jigoro Kano, the founder of modern Judo/Japanese Jiu Jitsu, realized that the standard kimono was not as practical as people accepted. It might have been a tradition but it was a tradition that had to go.

The kimono had been used for centuries in Japan. It was the traditional outfit of the Japanese warrior, the samurai. Samurai focused on armed combat and when they had to use their hands they focused more on grappling, wrestling, and submissions. This is because their armor made it difficult to strike.

This new design also meant that even a smaller, weaker fighter could easily grab hold of his or her opponent. The gi removed the advantage of speed and strength, allowing a fighter to focus entirely on their skill and experience in the art. 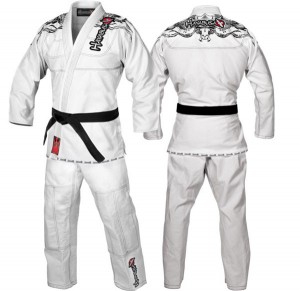 The Brazilian Jiu Jitsu gi comes with the birth of the Brazilian martial art. When Mitsuyo Maeda traveled to Brazil and began teaching, the Garcie family became one of the first students in the country. Members of the Garcie family worked hand in hand with Maeda and slightly altered the ways of Judo.

What they came up with was a style of Judo that enabled even smaller, weaker fighters to gain an advantage due to the skill and technique. This then became Brazilian Jiu Jitsu. To accommodate the changes they made they also slightly altered the uniform.

The gi is split into three parts: the jacket, the pants, and the belt. They can only be in three colors: white, blue, or black. However, a gi must be of one color, meaning a combination is not allowed. If you wear a black jacket then you need to wear black pants.

This is because the Jiu Jitsu gi is slightly tighter and heavier than a Judo gi. These changes make it slightly more difficult for a fighter to grab hold of their opponent. Because of this, the dynamics of a match are significantly different.

Regulations of the Gi

During competitions there are certain measuring tools to ensure that the width of the gi and its seams are all according to regulations and proper measurements.

The belt is a crucial part of the gi. There are five belts used in traditional Brazilian Jiu Jitsu and they are used to show rank, skill, and experience of a practitioner. The belt colors are (in proper order from beginner to expert):

While black is mostly considered the highest degree, there are a few above this. There is the coral belt (black with red), the transitional honor belt (white with red), and the grandmaster belt (red). However, to even qualify to wear the coral belt as a part of the Brazilian Jiu Jitsu gi it is required to have accomplished 31 years as a black belt.