Roughly 65% of parents who have enrolled their kids to karate schools have done so for their kids to have a social interaction with other kids and to develop self-confidence. 20% of the parents did so for their kids’ exercise. 15% believed that the discipline learned through the study of martial arts is a good life’s training. And, the last 5% got their kids into karate for other reasons.

85% of the parents who have enrolled their kids in a karate dojo claim that the activity has produced positive results on their kids’ behavior. Most say that their kids have become more outgoing. Others say that the karate experience has made their kids more interested in pursuing other sports.

The modern perspective of karate as being more than just the practice of self-defense but a means to character development has made its study a popular activity for kids.

What are the things needed to get into karate?

Is a karate gi really a necessity?

Nobody is expected to wear a karate gi on the first day of class. But as the classes progress week after a week, the count of students wearing the official karate gi will progress to 100%.

Practicing karate wearing something else other than the official karate gi is like swimming in your jeans and jacket.

Karate, and all other forms of martial art, is a study of a discipline that has a very ancient tradition. Part of developing discipline is the adherence to the old ancient traditions and practices. It requires uniformity of standards that has been established since the art’s initial inception.

How can you demonstrate discipline and uniformity when everyone can just wear anything they want?

History of the Karate Gi 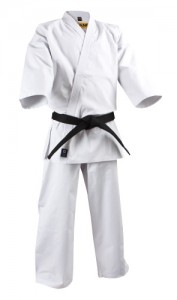 “Karate” refers to a form of martial art that originated in Japan. The word “Gi” is a Japanese word for uniform. “Karate Gi” therefore refers to the uniform worn in the study and practice of karate whether it be for practice or competition.

The practical explanation for the use of the karate gi is to facilitate free movement. It is made of light materials with shortened sleeves and pants to avoid tripping, tangling and allow for air circulation. The karate gi was invented by the farmers and fishermen from Okinawa, Japan. It served as their working clothes.

The deeper meaning is that the karate gi, with its white color, resembles the “sleeping robe”. There was a time when anything related to violence or associated with it was banned in Japan. So, those who practiced karate did it at night when they are already wearing sleeping clothes. So, the original karate gi was made of very thin material very much different for the ones being used today.

Components of the Karate Gi

The karate gi is composed of 3 pieces of garments; upper body robe, pants and a belt. Though they can already come in black, red or blue, most practitioners still sport the traditional white karate gi.

There are no standard requirements for the karate gi’s material. Students and trainees usually prefer cotton and polyester light materials. Experts who join competition and do heavy-duty training prefer the heavier, thicker and more durable materials.

Most karate school, dojos, sell karate gis in their studios. But there are always advantages in buying one for yourself online.
Buying your kid’s karate gi online provides you with the advantage of comparison.

There are a lot of stores selling karate and other martial arts equipment. Through the internet, you can compare prices. The price aspect is very important when it comes to kids because they grow up very fast. If your kid decides to go long term with the martial arts program, then you are bound to keep on buying bigger and bigger karate gis as your kid gets bigger and longer.

There’s no problem in buying your kid’s karate gi from the karate school where he is enrolled. But, you are likely to get a better deal if you do a little surfing on the net.

With all the stores having the chance of presenting their karate gis and other equipment on your computer screen, you will have unlimited choices on the material and quality. Most importantly, you can buy the size that will perfectly fit your kids. If you buy it in the dojo, you may have to settle with the available sizes.

Buying online also provides you with references about the product and the company selling the karate gis. You can make your best choice with the help of all the reviews and customer feedbacks for each company’s products.

You may even chance upon a special promo or discount that’s being offered at that particular time when you are in need of a karate gi.

Buying online presents no more hassles these days anyway. Payments can be made through credit card and delivery services are usually inclusive in the prices for as long as it’s within continental U.S.A.

So get your kids into the character building art of karate. Everything you need can be surfed and purchased online.

You can learn about Karate belts here.