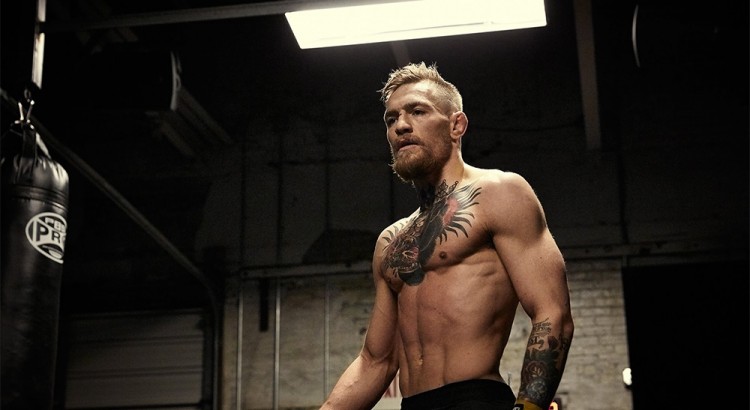 Conor McGregor, the 26-year-old reigning feather weight champion who also want to take Rafael Dos Anjos’ lightweight crown on March 5 at UFC 196, is an eclectic when it comes to the fighting arts. “I’ll train in any style,” he once told Steph Daniels of Bloody Elbow. “I always love to learn. I always look at everything. I spend all day looking at videos, or in the gym working on the things that I’ve seen. I started out doing some kickboxing and boxing, then a little Capoeira, Tae Kwon Do and Karate.”

“The human body can move in many ways, and that’s what I’m trying to do,” McGregor continued. “I’m looking for my body to move in all ways, to attack and defend. That’s translated into my fighting style. Looking back at the way I used to fight, and the way I fight now, it seems to always change, so I don’t know, I just keep trying to learn new shit.”

Indeed, from what’s already been written about The Notorious, McGregor apparently never had any formal training in any of the more traditional martial art forms. He had never put on an aikido gi, a judo gi, a kung fu gi nor any other fancy martial art uniform in his youth. While he did take some boxing and kickboxing classes, maybe some jiu-jitsu at the nearby neighborhood boxing club. it’s doubtful whether he managed to earn some brazilian jiu jitsu belts, krav maga belts nor any other official proof of completion of any other formal martial art training course ever. Instead, it seems he just spends a great deal of his time at the gym teaching himself to fight in as many fighting styles as he can.

Born to a mid-range working-class family, McGregor trained at the Straight Blast Gym in his native Ireland during his off-hours as a plumber’s assistant at a construction site. Every day, he worked 10 to 12 hours at the site, from where he’d proceed straight to the gym for training. On weekends, he fought across Ireland. After eight consecutive flashy wins in less than two years, Dana White finally took notice, came to Ireland and signed McGregor on for a match with Marcus Brimage on the UFC’s April 2013 show in Stockholm. The Notorious knocked Brimage out in just over a minute of his debut UFC fight.

In less than two years, after just five fights, McGregor had become one of the UFC’s biggest stars. His victory over Brimage was followed by his wins over Max Holloway, Diego Brandao, Dustin Poirier, and Dennis Siver. On Dec. 12, he knocked out Jose Aldo in a bout that lasted all of13 seconds, making it the fastest finish in any UFC title fight ever. He is currently on a 15-fight win streak, 14 of which have not made it past the second round. He is now he is No. 3 in the official UFC pound-for-pound rankings. He’s also become one of UFC’s biggest money magnet. Even his weigh-ins are now filled to capacity events.

So what is it about McGregor that makes him such a big crowd drawer? Aside from having a genuine Irish gift of gab, he is quite fascinating to watch in his fights. Hs movement seems to mesmerize not just his opponents but also the watching crowd. Strange, even comical, his movements although always fluid are often unpredictable. And he is doing it deliberately. In fact, in his Bloody Elbow interview, he revealed: “To me, the most important thing is to be creative, to be spontaneous, to be fearless and to approach it without a plan. Approach the contest with no plan, with no set movement and just let it flow. Do shit that has not been done before, and trust me, I have shots that have not been shown before. I have shots in my book that have not been seen before, and I look forward to showing them.”

“I’m a martial artist, and I’m open to all styles of combat,” he declared. “If someone wants to wrestle, then let’s wrestle. Wherever the contest takes place, the contest takes place. I’m prepared for it all. I fear no man. If you breathe oxygen, I do not fear you. People think I’m just a stand-up guy, well that’s great. Let’s see, you know?”

McGregor is obsessed with movement. At the gym or at his parents house, he’d been seen doing bear crawls and swaying like a gorilla around by himself. After his fight with Holloway, which he won but wherein he got his ACL torn badly, he became even more focused on his movement and fluidity trainings. On fighting tactics, he told reporters, “If it doesn’t involve controlling the human body or manipulating it into a position where it is forced to submit, I don’t want to know. To be able to control someone with your own pressure and movements … that’s a science right there – to shut down another man’s body.”

Before his fight with Aldo for the UFC featherweight crown, McGregor famously hired globally renowned movement expert Ido Portal to help him prepare for the fight. Portal was an Israeli teacher of Capoeira, a Brazilian martial art with combined elements of dance, acrobatics and music, before he segued and founded his own “Movement Culture,”an entirely separate discipline that is focused entirely on the science of movement.